DPRNK My Country is the best! [Subtitles]

Only difference between airstrip 1 and the valley of the dolls is that the more powerful footballers are to be found directing traffic, like Kim chi Angies packing heat, there. 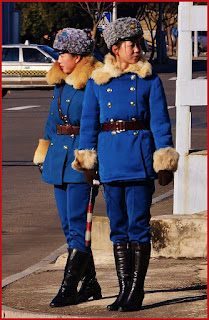 I mean if you expect a society, worshiping useless imported racist eaters that can hide pig bladders up their arseholes, to be in any way capable of bringing liberty rather than brining it, real liberty to a country that is happy, well go and stick Goldstein am automatische brain smashing machine like TavistUKplc.

One day all the expensive debt played turfs, death light gulag pools and wire surrounded concentration pitches will be grave yards. Twickenham as Katyn. Wembley as Kolyma. Go look at the hanging gardens. Just as airport design is only given to certain initiates so that secret exit channels, big muppet overwatch and staged terror zones are worked seamlessly into the cryptic geometry, Take a look at the Chicago stock yards and compare to the arenas and stadia of death. Go look. We find restricted movement as ritual induced psycho drama, heightened emotional decant, no terminus as guarantee repitition and absolute fiction filled reality as sacrament.

OFM. Do you seriously think that the serial swelters on Fartenders are going to escape the fates? You do.

It will be interesting to see how quickly the new religion from the divine mountain takes over the ballbates in the media trenches. It is easier to take geezers who would march in massive squadronnaire routines into the future than brain dead conzentrazionlager soap fans.

Oh the body count will I predict be 100% for Corrie fans. 99.99999% for the statofreaks and cockworshipping shirtfillers.