Which bit of realpolitiks don't NATO smurphs get? 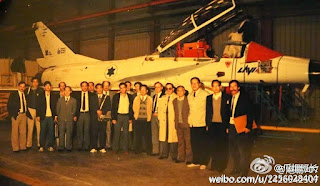 SNAFU!: F-15 Silent Eagle...Israel wants it!: via FlightGlobal. An additional squadron of advanced Boeing F-15s has been revealed as one of the elements of a so-called "compens...

It has been obvious for decades that the ChiComms are the RCE/TA's bestest buddies. What with the dual nationalist terroristas that operate out of the fuerzes especiales firebase in RCE/TA sending all western tech to the ChiComms since 1970, at least. I would contend that Dimona helped out with the ChiComm1964 nuke test.

So the RCE/TA air pirates want us to believe that they are considering a 50 year old airframe concept for the 2020s are they? Fuck off!! They are treading water until their ChiComm buddies release J?? for export. Well actually it won't be export, more delivery of joint development prowdakt. One has to consider the sabotage of the F35 as part of this programme of switching supplier.

Note how the airframe composition of the air force of the terrorist fire base changed over time as their influence within certain governments/states waxed. First it was old SS run airframe/aeromotor suppliers in the vaped Reichprotektorate where their managers from the SS run plants still worked. Then it was commie French machines using old German tech for second generation airframe/aeromotors. Then when their dual national agents had enough clout in congress and the senate, the USofA corp paid to have its machines used to terrorise civilians.

So who is next to be invited to hand over kit for free? Well all you have to do is check the Far East media for all the spew about how the RCE/TA terror fire base and the ChiComms slavers are the oldest civilisations, stone aged, on earth. Check the number of dual nationals working in the altMSM and MSM out there talking bollox as usual about politics in Taiwan and ChiCommland and you can guess what is coming.

How many times must I say it?