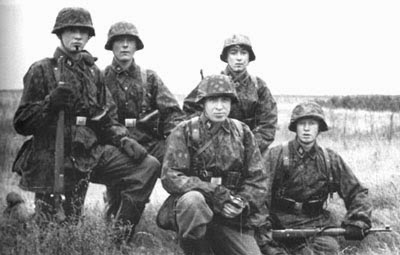 It is curious that no one was prepared for war except the Soviet Murder Army and the Japanese Imperial Army. All business units and plantations were too cash strapped to buy anything but fine wines and whores for Rock/Roth.

Only the Soviets were actually given the fully favoured nation status of non pariah state. Everyone else was under the sanction of some sort of embargo. Whether it was food, money, access to markets, jobs, materials or armament only the Murder Army economy was operating at full capacity and even then only because all the population had been murdered.

USofA corp. had no physical tanks in 1940. Neither did Germany have real tanks. Nor did Italy or Japan. UK had a joke for tanks but then again it did not intend to actually do any fighting. France was a abstrack..

All those German staff officers that reckoned with British/French intervention on their side against a full Soviet sweep of Europe into the sea were set up. When one realises that everyone else was to bleed to death, the British gambit, of what was a non sensible position for UKplc in 1939, of actually declaring war makes sense in a global business plan. The UK had no chance of winning anything at all unless everyone else died. UKplc was already well on the way to a post industrial pastoral retarded slave camp with nice fauna and flora by 1930 so what was it going to do by 1950 unless everyone else suicided, was very much the roll of the die in beliefiat religioterms. It keeps coming up again and again; that expectation of the western allies joining up with the sausage munchers to flatten the Môn heathen army, at every point in the war after the high level money shaman started to call in favours after it was pointed out that to kill the Germans might not be enough.

Somehow the ordinary kraut grunt and prole didn’t realise, in 1944, that they were deemed anathema to yahwahabibollox, watch how the Bishop of Ba’al Hammon washed his pontifical pirate hands of his flock there. Their minds, weltanschizzle, which continued to cause major headaches to the closed monominded cuckooeviloids of the happyahwapochabollox for centuries and centuries had to go at last. Their nest was too hostile to infiltration by gynocriminals and mittyscribes.

I do chuckle at the learned elders of fanta as they try to explain that the deepest secrets hidden in the Jonas, Giant, Stab et al were protected by triple layers of security, intelligence and counter intelligence. Ophuck me and Bombay duck. Yeah and I’m going to get distracted by dark yogi delivery boys ducking bullets in the Reich chancellery in 1945. How come it was all protected if Mueller, Bormann, Braun and buddies all ended up tucked up real tight in beddybies each night. After all the war crime of the millennium had just taken place. Always with the hyperbole Ziggybolloxdust. So if the security around these impenetrable places was a load of cobblers, then what else was?

Remember that security ONLY ever applies to you and me. Go try getting the dirt on any commercial R&D or prison complex installation and see where that gets you. However their bankers and accountants, especially any consultants, will have all the gen no matter how well compartmentalized the mythmaking.

Isn’t it a funny old world that has inhabitants of riggedmarket slavereconomies not knowing anything about real life in their kulak gulag run by religioKapos?

So what is annoying your correspondent?

When did the plan have to change because of forces, for once, out of the inbred Môn heathen’s control through its favoured Pharmacy? What happened, that we cannot see even at remove or echo, to make the current mess?

Well the Môn heathen got a mission, a likely extension of an ongoing mission between terrorist Zionists and SS officers, and it is only through the indices of that mission’s imaginary numbers, illogical dispositions, futile murder, and hysterical comic strips as fact as learned fiction that the unexpected came into being and got lifted to the wrong destination.

The only reason you got a welfare state and NHS after 1945 was to integrate a vast number of so called refugees that didn’t want to pay for anything.

In the good old days, 1940s-stylee, you could gun run out of Barnet,London for Palestine with impunity. One could take part in terrorist activities till you ran out of RDX and powdered aluminium and head home to Hendon. The ratruns had been set up during WW2 by British forces and German spys.

“So what has all this got to do with IR?” I hear those who have struggled this far groan.

We continue next outing to ponder all and will concentrate on three singular sentences in three separate places.

The Morning of the Magicians,

and my brainsqueezings here last Jan.