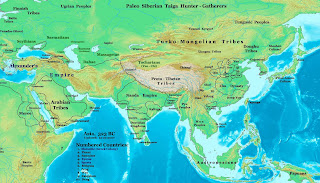 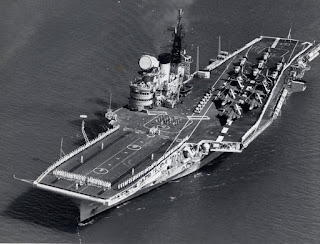 It has always bothered me, since I was a lad watching Pilger on TV standing amongst nonstoichiometrical combustion byproducts and BBQ’d gooks, why UKplc kept out of CochinChina. We are drug shifters zentral after all.

Well looking back from the nearly 2020 hindsight afforded here one of the reasons has to be running chicomms into Portuguese Africa from RCE/HK. It took all the RN had to keep at bay and safe. And you wonder why chicomms are now all over . And you wonder why the Kaifengboats are wandering all over the SLOCs and Russians are not welcome anywhere. RCE/LC, ground zero for genocidal bankster planning. 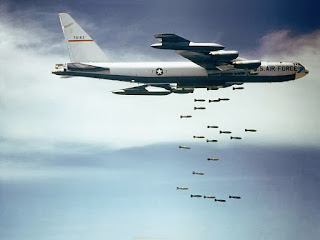 Basically RCE/LC could give a phukk about the Bilderbergers. "Is it a sandwich?"

As the Second World War (Winston Churchill's nomenclature) recedes into the past, the survivors can hardly help reassess its events as the assumptions and propaganda of the time fade from memory. If we take a British perspective, we might examine the people aged about 25 in 1945: one such is Denis Healey, a politician notable for coiffed eyebrows, an education mainly in the Greek and Roman classics, and a reputation for great intelligence despite his lack of knowledge of everything important to the modern world. He was somewhat in the mould of Tony Benn.

Healey's official posts were in 'Defence' (1964-1970), under Harold Wilson, just after the and J F Kennedy Jewish coups in the , and during the peak of bombing and genocide in . And, again under , as 'Chancellor of the Exchequer', a picturesque title hiding the Jewish foundations of this role. Healey must have been groomed for such roles; he was ideally unqualified. He held no further cabinet posts: Thatcher shifted the Jewish focus to taking over British assets, as the Common Market morphed into the European Union and began imposing its entirely undemocratic Jewish worldview. I doubt if at any time Healey understood the world: in his youth he was in, or effectively in, the Communist Party: in other words, happy to be either a supporter of Stalinist mass murder, or a hater of , or a subordinate of Jews. Whether he knew this, or preferred not to have doubts, must be in doubt. He never understood doubts about nukes or the 'Cold War'. As far as I know, he never understood or opposed the monstrous fraud of six million Jewish deaths: He was not exactly thuggish, but impervious to new views. I remember a TV appearance (probably BBC) in which a German WW2 army group was praised by a chap with an unfortunately high voice as excellent or first-class 'fighting men': Healey replied their record was 'well-known and excoriated'.

As the post-1945 world developed according to Jewish financial plans, Healey, like everyone, faced novelties: BBC television emerged from the chrysalis of BBC radio, with the oleaginous Richard Dimbleby exemplifying the covert Jews—funded with paper money, genetically programmed to lie, passing his poisoned chalice to his repulsive sons David and Jonathan. Myths such as the 'Labour Landslide', the honourable victory against evil Germans, and accurate reporting on budgets, were ideal for the new medium. The BBC was resolutely anti-intellectual: all reports are fronted by vacuous actors, reading their lines. Never by experts. My piece on the 'satirical' Private Eye tries to sum up post-1945 .

Nick Griffin on the way the BBC mispresents serious news.
Jews won the Second World War. They got into their stride with a vengeance—a vengeance against any possible enemy. Eastern Europe and were occupied or wastelands. The Holocaust fraud, as yet unnamed, was born. So was the fraud of 'atom bombs' over . Both these things were hugely lucrative, paving the way to NASA and medical frauds, up to 9/11, which fifteen years later remains officially uninvestigated—unless you count a 'commission' under Kissiger— unpunished (plus of course many false flags, such as Tonkin, and many assassinations, the most notable being J F Kennedy). H G Wells's 'World Brain' did not appear for at least 50 years. Within a few years , a negligible intellect, was crowned. And 'Stalin', the masqued disguise of Jews, died, probably poisoned. American-ZOG bases spread around the world; so did Rothschild central banks; so did violence in ; so did undeclared wars. And the start of Jewish transports of blacks into , starting with the Jewish-owned MV Empire Windrush to 's port area.

There seems little point in tracing Healey's career from one low point to the next, up to his trips to the House of Lords to collect his attendance money and his 1989 (according to Wiki—I haven't checked) autobiography, The Time of My Life—hefty, thick, and I imagine (I haven't read much of my 'used' copy) laughably naïve. He seems to have managed just one mot juste, or whatever the phrase equivalent is: "Life is not a rehearsal." (I've just remembered another oratorical triumph: he described an attack by Geoffrey Howe as like being "savaged by a dead sheep").

Wikipedia says Healey 'was succeeded by Roy Hattersley' (b 1932, not quite the next generation), giving his full title as: the Right Honourable the Lord Hattersley, Baron Hattersley FRSL, PC. As with Healey, an alphabet soup of state-bestowed distinctions accumulated, as worthless as African PhDs and Nobel 'Peace Prizes' and TV appearances with David Dimbleby. Hattersley divorced after 57 years of marriage to marry his Jewish literary agent in 2013, though one wonders whether Internet writings have displaced his 'golden mediocrity'. (I quote the Occidental Observer on Hattersley, and Healey - http://www.theoccidentalobserver.net/2015/12/let-them-eat-cake-the-army-of-fanatics-at-the-heart-of-europ - which prompted this review as thoroughgoing and complete un-democrats. The author is the first person I've seen to describe the 'Labour Party' as a criminal conspiracy in disregarding the voters' views and disregarding crimes such as rape of whites, in a similar way to the 'Bolsheviks' whom I doubt many people would regard as a 'political party').

Healey probably never had any sort of genuine socialist feeling. From his early years, Jewish propaganda in the UK had been overwhelming. Healey did not begin to have the independence of mind needed for intellectual appreciation of the world. Ben Pimlott's 1992 book Harold Wilson said (I quote from Lobster, a supposed inside mag on spies and politicians, which is either Jew-unaware or a front for Jews: '... Labour politicians after the Second World War, for whom was an entry-ticket into the governing class, if they were not members of it already. Hugh Gaitskell, Douglas Jay, Richard Crossman (all New College), Frank Pakenham [later Lord Longford], Patrick Gordon Walker, Christopher Mayhew (at Christ Church), Denis Healey and Roy Jenkins (at Balliol [College in Cambridge]) shared staircases and ate dinners from their very first term with well-connected, well-off young men who already had a confident view of their own place in the world. ... ' The Labour Party was supposed to have been funded mostly by Trade Unions, though I suspect this was a misdirection; certainly, now, the 'Labour Friends of Israel' must loom large. (I'd guess confidently Corbyn now is just fake opposition, a double-act with fellow Jew Cameron). Later in Healey's life, here's another extract from a Lobster book review, revealing Lobster and of course most commentators' utter failure to understand Jewish money and frauds:– 'Before his well known roles as Minister of Defence and Chancellor of the Exchequer (during the Tory-induced inflation of the late 1970s), Healey was a central figure in the Anglo-American defence establishment, an intellectual who knew enough to talk and write about NATO policy and nuclear strategic theory, not just deliver briefings.' Lobster's 'Tory-induced' comment is part of the mythology of politics then: Healey's role probably was to support genocide in (with Jewish-provided reasons to hide their money-making) and to support capital flows in a Jewish direction. Probably post-war 'Labour' had some sort of secret agreement not to mention Jews; there was no publicity for repayments of war loans to Jews, or Jewish control of marketing boards and trade, or Jews and the IMF and World Bank, or of course paper money.

What part Healey played in MI5's claimed attacks on Wilson are not yet known; I would guess there were a few honest Brits, perhaps (who knows) influenced by the King David Hotel, or by 1956 Hungary, or the subjection to the Fed. Healey (according to Jon Ronson, quoting Healey) 'created' the Bilderbergers in 1954 (the same year as Dien Bien Phu), with Joseph Retinger, David Rockefeller, and Prince Bernhard of the . Healey wrote in praise of Bilderberg, but with a complete absence of any traditional socialist feeling. Obviously enough, Jews after the Second World War's official endings must have fished about for collaborators, and people in the 'Labour Party' with their internalised feeling of being on the indubitably correct side, plus their officially-sanctioned 'good' education and social-climbing ambitions, and the endless paper money in the background made available as a series of pleasant surprises, plus the free availability of BBC publicity, must have made a 'no-brainer', in the silly slang of more recent years. And in addition, the exciting goad of being in on a criminal conspiracy. An unexamined aspect of all this is the Civil Service: the 'servants' in effect have life tenure; at the time there were few careers—perhaps teaching— offering such security. There have been very few exposures of their mistakes and incompetence. But the battles and manipulations with Healey must have been profound, though perhaps like the blind leading the deaf. The Bilderbergers must have marvelled at the gullibility of the parade of goys. And their purchasability. Anyway; let's stop there. Healey is as dead as a napalm victim.” H/T Rae West