Now we know how the nonhomologated aggregate Russian felt…..

…, soon to be aggregate in the road to Kolyma, as the poor disgusted sap watched idiots embrace futility disguised as utility, wrapped in learned helplessness seeded by Grimaleaders and fauxcaptains, the 1905 equivalent of the 2020Merchant deathmuppetry, distribute phukkkwittery as freedom in a protogulaggery skit and farce script lacking the script and scrip. We now can see that it would take the establishment of the Federal Reserve Counterfeit Publishing and Counting House to create enough pay off doe to finally lay the fallow fields of sterile believers and undermine the edifice of life after 1913. 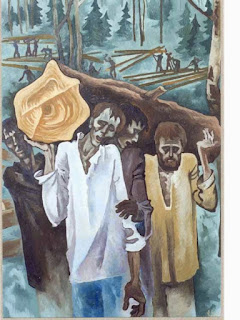 Since the time that the local wandered buried the stones at Gobekli Tepi the artistes of the lethal light opera theft scam have rejoiced at just how easy it is to take the herd to the slaughter space once the breakaway mind set had been achieved. Unlike the putative breakaway civilisation of Dolan/Farrell/Fitts, the breakaway mind set does not need stolen trillions, its costs and costs are nothing and are forever self maintaining by illustration. If you pass this test then you are the problem. Which would you rather have, everything in all poverty or nothing in singular plenty?

As ever in the KeyStoneCopperyworld of academia absolutely everything is a mystery as to the cause because the cause is so obvious it needs your death if stated so reality blindness can graduate. Every opinion stated as true in the academicphukkwitteryspace is an oxymoron bubblequeefed out an accredited moron’s rothsoiledcredentialed rottedsphincter.

As related in this triblog area, several times over the passed decade, our current constructed setting of the stage pawns was evident 30 years ago. One of the key pawns since 1989 was the sale of US West coast bases, Another is the F35 debacle, never has so many dollars been received so gratefully by so few unable to deliver.

One thing not obvious all those years ago was the target of the operation.

A lot of water has flown under our bridge and gazillions of words have been absorbed as the spoor of the perps has been tracked down over time. Place and time are the allies in all this constant turbidity in the Walter Mitty secular religious OCD minded ADHD number worshipping closed system feveredreality of their stubbed, stunted and diseased contagious imaginations. Every number is a toxic mind virus and every time one uses their accounted £numbers one might as well put a new contracted belt of $DU into the %50cal and kill off a load of real human beings,

Even more lethal to our survival, prosperity has gone forever, is the self traitoring we practice every moment of our lives as we worship at their religious centres and cohere their wishes into reality by our prayers.

That’s correct. Now that we are GUMstore paroleproles, all marked and spaced outside their sacred spaces, we not only create and load the $DU rounds, we actually hold the 6 shooter to our head with 5 rounds in the chambers.

By now we should not be feeling lucky as we are called to prayers at the monetised ziggurat. Mind you we are blessed compared to the hundreds of millions of unhomologationed who are going to be removed from the world soon in an archipelago south of Singapore, a region east of Hyderabad and forest centred on Brasilia. Oooo err I hear you mutter WTF!? Well consistent scalability in the erasure of persons and evidence is the mark of the unbroken system we are kept by. Inconvenient persons like Germans get obliterated but the more important target is persons inhabiting inconvenient areas, areas where the archaeology rests that would destroy the carefully cultivated lie of where we came from a la holy murder books’ lie.

Now the next item to consider is not the nonhomologated, unhomologated nor homologated but the triggered entity.