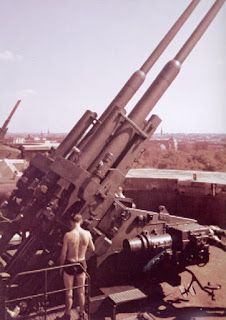 Over forty years ago now. And it was a close run thing. Flakwaffe super battery concepts and 1.5 gen SAMs against 1.5 gen jet bombers and Radioshack countermeasures.

If you know about the counter-counter-counter-counter and counter again game run against Nachtjager by the Commonwealth lads in bean countered defenceless bomb trucks and skin of their teeth failed runs like Peenemunde then you can work out that the Linebackers were more bankerchoreography against USofA corp. When one considers that the (Soviet paperclip) geezers who had the 2nd and 3rd gen SAM belt concepts, ABM incl., test run out east of Perm in the 1950s, were kept bottled up, watching whilst Kissmyassmessenger delivered word to the ChiComms that their day was coming, one doesn't need to be a rocket scientist to work out what happens next.

When the ChiComms move there will be no, I repeat no, US TacAir operating, able to operate, in their well prepared environment.

I mean come on; how much of a piss take is it to have SAC running the equivalent of 2TAF ops?

I suppose it should be obvious by now that the ChiComms are now invested with the Violent Panda mooted in Digital Cacophony. The ChiComm slavers are the only armed forces able to indulge in sub troposphere Imperial Wizardry.

The outcome is as yet undecided; either they will become Cabal Global Unity or the rest of the planet will be fully integrated to roll them over and then CGU will rest upon an exhausted world by default.

The flies will be bloated and blacken the sky.