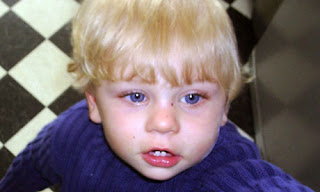 Thomas Sheridan's Official Blog: Infant Cannibalism Ritual for Thanksgiving?: As much as I hate to give Monsanto ideas for their future product ranges, but US crafts websites aimed at Middle America have long been a b...

Relics of
Show Brutality Amid the Good Life

Published: September 1, 1987
A TROVE of relics now arriving in contains evidence that the ritual slaying of
children in ancient
was so common that it helped control the growth of the population and helped
families keep fortunes intact over generations, archeologists say.
And through these indirect economic effects,
some scholars assert, the practice of infanticide helped produce 's great wealth
and its flowering of artistic achievement.
Among the treasures being uncrated at the
of Natural History in
are magnificent bronze figures, opulent jewelry and ornaments, and some of the
most beautiful mosaics of antiquity. Such masterpieces, scholars believe, were
made possible by the patronage of the merchant rulers of , whose wealth was without equal in
the ancient world.
But the collection
also includes cremation urns and religious paraphernalia of the kind used to
sacrifice some 20,000 children from about 800 B.C. until 's destruction by Roman invaders in
146 B.C. At the site where stood, now a
wealthy suburb of
on the north African coast, is a place scholars regard as the largest cemetery
of sacrificed humans ever discovered.


The
175 pieces in the Carthaginian collection, whose five-month display at the
museum begins in December, were lent by six Tunisian museums, which are the
repositories of all Carthaginian relics. Some artifacts were found in current
excavations.
Dr. David Soren of the ,
who spent seven years organizing the collection on behalf of the museum here
and other sponsoring institutions, believes that it casts new light on a
longstanding paradox. ,
the most important commercial center of its day, produced one of the greatest
civilizations of antiquity, and yet it practiced ritual barbarities that
horrified even its brutal contemporaries.
''There was a peculiar dualism in ,'' Dr. Soren
said, ''in which the thrust for commerce, prosperity and the good life were
blended with a religion so intense that the richest Carthaginian could
cheerfully consign a son or daughter to the flames of the sacrificial pit to
redeem a pledge to the gods.''
Not all scholars believe that the sacrifice of
children in
was widespread or systematic. The Carthaginian artifacts now in typify the kind
of evidence that is fueling scientific debate on the issue.
''This debate has something in common with
disagreements among anthropologists as to whether or not any society ever
practiced ritual cannibalism,'' said Dr. Lawrence E. Stager, professor of
Middle Eastern archeology at Harvard University, In both debates, he said in an
interview, scholars have sometimes been influenced by their feelings about the
societies involved. ''Some scholars,'' he said, ''regard Carthaginian
civilization as so advanced and sophisticated that widespread human sacrifice
would have been unthinkable.''
He suggested that this view may have
influenced the opinions of the French archeologists Claude Schaeffer and Helene
Benicho-Safar and Moshe Weinfeld of , who are among the scholars
who doubt Carthaginian human sacrifice was extensive. Some See 'a Bad Rap'
''Their contention,'' he said, ''is this: was vanquished
and its records were destroyed. Carthaginian history was therefore handed down
by the enemies of , namely and ,
and
has therefore had a bad rap.''
For example, the 3d-century B.C. Greek author
Kleitarchos is credited with the following report from , in which the author refers to the
the Greek equivalent of the Carthaginian god Ba'al Hammon:
''Out of reverence for Kronos the Phoenicians,
and especially the Carthaginians, whenever they seek to obtain some great
favor, vow one of their children, burning it as a sacrifice to the deity, if
they are especially eager to gain success. There stands in their midst a bronze
statue of Kronos, its hands extended over a bronze brazier, the flames of which
engulf the child. When the flames fall upon the body, the limbs contract and
the open mouth seems almost to be laughing, until the body slips quietly into
the brazier.''
But anti-Carthaginian propaganda or not, the
evidence of classical writers is now supported by some of the pathetic objects
at the American Museum of Natural History gathered from the Precinct of Tanit,
the huge and sinister children's cemetery of ancient Carthage.
''Some have argued that those children died
natural deaths and that the Precinct of Tanit is an ordinary cemetery,'' Dr.
Stager said. ''But in an ordinary Carthaginian necropolis, one finds normal
proportions of both adults and children, some cremated and some not.
''At the Precinct of Tanit, however, there are
only cremated children ranging in age from still-born fetuses to children four
years old. There are also bodies of young cremated animals. The charred bones
of both children and animals were buried individually in special clay urns with
stone markers dedicating them by a special symbol to Tanit, the preeminent
Carthaginian goddess, and to Ba'al Hammon, of whom Tanit was the consort. The
graves in normal cemeteries do not have these dedicatory markers.'' Grave
Markers' Stick Figures
The art and artifacts assembled in include urns
and markers gathered in recent expeditions from the Precinct of Tanit. The
grave markers are decorated with a peculiarly primitive stick figure
representing the bloodthirsty goddess.
From its earliest days in the 8th century
B.C.,
sacrificed animals (lambs and kids) to Ba'al and Tanit, dedicating the
offerings as ''substitutes for children.'' Traditionally, Dr. Stager said,
archeologists have tended to the view that as advanced over the following 600
years, the practice of human sacrifice subsided as the sacrifice of animal
substitutes increased. This is in keeping with the supposition by historians
that human sacrifice, at first transformed into animal sacrifice, eventually
evolved into the bloodless wine-and-wafer Eucharist of Christianity.
But excavations led by Dr. Stager and others
have shown, he said, that in ,
the trend was reversed. The oldest burial layers at the Precinct of Tanit hold
urns containing burned skeletal remains in the ratio of three children for one
animal, but in a later era, the 3d century B.C., the ratio increased to ten
children for one animal.
''It has yet to be
proved,'' he said, ''but the evidence is accumulating that Carthage found
religion to be a convenient basis for controlling the size of the population.


''In
the first place,
became extremely crowded as it prospered. According to the Greek geographer
Strabo, the capital city had 800,000 people at its peak, and even allowing for
exaggeration,
probably had a minimum of 100,000. Farmers and nomads, including ancient
Berbers closely related to today's Berbers, moved in large numbers to the city.
This would have been a huge population for the time, and might have stretched
food and other resources.''
Dr. Stager believes that a major reason for
the depletion of resources may have been the large-scale abandonment of farms
as farmers sought the opportunities afforded by life in the big city.
Dr. Stager sees an important clue in the fact
that a very high proportion of sacrificed children seem to have come from the
wealthy class that ruled plutocratic .
Rich Carthaginians were anxious to avoid having to divide their estates among
many offspring, he believes, and solved potential inheritance problems by
handing unwanted heirs over to the priests of the cult of Tanit. During the
Tokugawa period in ,
he said, child sacrifice for similar reasons became common. In feudal , the rule of primogeniture helped to ensure that
an estate would descend intact to a single heir. Lower Classes, Too
Child sacrifice in was gradually ''democratized,'' he
said. The children sacrificed during the 5th century B.C. were nearly all
''offered'' by parents of the elite class; by the 3d century B.C., many of the
offeratory markers were from parents in the professional classes and even mere
artisans.
Excavations have been hampered by modern
housing developments since the children's bones were first discovered in 1921. , a fashionable
seaside suburb, is the site of the Tunisian presidential palace, and real
estate values there have soared.
In 1974 the United Nations, assisted by
institutions from 12 countries, began a drive to ''save Carthage'' by
preserving or studying as many ancient Carthaginian sites as possible in the
face of rapid urban sprawl.
''We were already too late,'' Dr. Stager said,
''and it is now harder than ever to get permission to dig in the garden of
somebody's villa. We have not even been able to determine the exact boundaries
of the Precinct of Tanit.''
Archeologists point out, too, that in the sack
of in
146 B.C. the Romans razed the city, even exporting the multicolored marble
rubble for use in Roman construction projects abroad. Any Carthaginian
documents or literature that may have been written on parchment or papyrus has
long perished. Even the last-ditch expeditions of the past several years to
save what was left have failed to turn up ostraca - texts written in ink on
fragments of pottery. Such records made by the Phoenicians, the ancestors of
the Carthaginians, are often found elsewhere.
Another threat to the vanishing traces of is water, Dr.
Stager said. A rise in the water table linked to changes in land use has
immersed the pre-Roman layers of ,
and pumps are needed for excavation.
In the 3d century B.C.,
was the equal of in power, wealth and pomp,
but in 146 B.C., at the conclusion of the three bitter Punic wars, wiped the
Carthaginian capital off the map. However, in its place arose a new Roman
Carthage, and Dr. Soren points out that
did not entirely die with the Roman conquest.
forced the Carthaginians to learn Latin and to give up human sacrifices, but Carthaginian
sculptors and artists were soon enriching the
with their unique gifts. They also continued to worship Ba'al in his new
incarnation as the Roman god Saturn. 's
Elephant
Some of 's
most magnificent polychrome mosaics of hunting scenes, feasts and gladiatorial
contests date from its period as a colony of . One mosaic on loan for this exhibit
depicts a fanciful elephant in the coils of an immense python.
The great Carthaginian general used elephants in crossing the Alps to in 218 B.C. and in the course of his
campaigns, almost wiped out 's defenses. But 38
years after 's death, won its revenge: the destruction of its
rival.
The anonymous artist who created the great
elephant mosaic may have been thinking of 's
elephants and the lost greatness of
as he worked. ''In any case,'' a museum official said, ''the artist certainly
left us something beautiful to take our minds off those poor Carthaginian
children.''
Photos of a clay urn and a bronze Dionysus,
dating from Roman period (NYT/Keith Meyers); map of Mediterranean area around ; photo of first
excavation of the Precinct of Tanit (World Wide Photos)
http://www.nytimes.com/1987/09/01/science/relics-of-carthage-show-brutality-amid-the-good-life.html