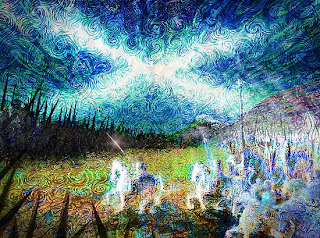 Well your correspondent popped onto this mortal coil at this hour a prime number of years ago. Though by dint of location it is not his birthday.

What’s in a name and a place?

From the Greek name Ανδρεας (Andreas), which was derived from ανηρ (aner) "man" (genitive ανδρος () "of a man"). In the New Testament the apostle Andrew, the first disciple to join Jesus, was the brother of Simon Peter. According to tradition, he later preached in the region, with some legends saying he was crucified on an X-shaped cross. Andrew, being a Greek name, was probably only a nickname or a translation of his real Hebrew name, which is not known.

What’s in a flag?

I’ve only ever burdened you with one tentative conclusion so far and considering the name and the day I’ve firmed up another one.

The false flag bearer is legion and is far more dangerous than any nationalist.

Ανδρεας knew who they were.