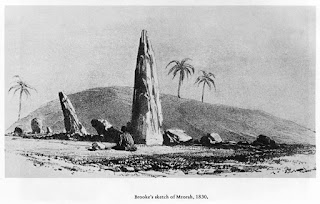 From an engineering point of view the choice of the hardest rocks suggests the designers intended to use their conceptions for a very, very long time with very, very little spatial variance over that time. These were not award winning temporary cattle sheds of the built environment, land stealing con, public building PPI UKstylee. The piezoelectric and dielectric properties of some of the materials chosen will also have been an engineering requirement. I would also contend that the materials would have had a human mind interference effect as part of their original spec, more on that later.

The global potioning of these sites was also an engineering confection. A magic concoction that was most likely only vaguely remembered even by the peoples who we faintly mythologies in legends now half echoed in falling pre iYahweh recall.

How long ago were these vast machines constructed? Well the machine in Brittany which walks into the Atlantic Ocean must be tens of thousands and thousands of years old since all we see at the sea are the knobs and dials at the east gate, the altar equivalent is way under the waves now. When functioning, the original centre would have been far, far away from any sea spray occlusion of ceremonial and operational.

So old are these places that we must divorce ourselves from any concept of European. This is the land that would have been unknown to Greek myth. Most likely just vague memories to Gallic myths long lost. It is a land long before the pre-bicameral mind.

“So what do you want to say knobend?” I hear you murmuring.

Well we might not know much about the Bechtel, G4S and John Company equivalents of 40,000 years ago but we do know some things for sure.

They did it. What did they use the machines for? Well to get at the very, very oldest layer of this story we have to forget all the rubbish we’ve been told about these places by so called historians. We need to disarticulate the stones and wood reconstructions from attempts to explain, in modern terms, their function. These are declined attempts at recovery of lost knowledge even all those millennia ago. Little did the Egyptians know that even in Atlantis there were legends of a higher age, …..mmmm….well that depends how much you think they told the wandering Greek.

We also know, from those sites remaining, that the original surveying work in choosing the site involved quantity and gravity. Quantity because a shed load of surface had to be prepared and moved. Gravity because the surface had to be level. Not space shuttle landing or VW test track level, like curvature of the Earth smooth, but level for fluid lens level.

The oldest sites will have had the simplest structure. These, the first attempted continuation, would have The altar and a sun fix. Once that age disappeared the new and/or recovered sites needed the back up of more elaborate stone patterns to get solar system fixes for the lost capabilities of the gravity eyes. I suspect that that is when the long counts got started and numbers invented.