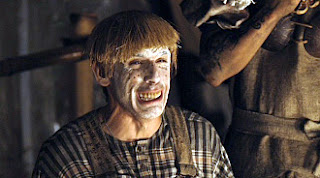 War News Updates: Why Western Analysts Fail In Analysing Russia: Russia's President Vladimir Putin chairs a meeting of the Security Council. One European expert estimates that at least a third of Ru...

Some do indeed go the full retard. Not because they are too stupid to play their roles out but because the money is always to good when you are acting out some sort of career choice as life style abortion. Let us face it the western by that I mean fullmongtardMSM are braindead Talmudbitchkaballahboys of the temple now. They've cut their own balls, cocks and fannies out with joy within their sterile fukkwitz hearts. No one does anywrong inside their chosen charmed circle of death.

Anyway before we get too wordviolent something heaves into view.

On a Pre Array of Ring of Precessional Brightwaters

Three blogs have wandered into the Brilliant Warrior shootdowns/disappearances/magicshow second shoe at the Sands the other day and they are weirdly synching with the mindlessness ahead at this blog.

Why would a surface based fleet defence second layer system and a medium transporter from Brasil, separated by half a century or more in their genesis, be of interest here in the phukkwitterycounterskein?

No idea, that is why I bang this stuff out. However let us get on with some of my prepared speech.

I noted a few weeks ago, just as Romania was about to go live, that the ABMs are really just hyperactive SSMs. If they go mental there is no, repeat no, time to duck and cover.

As gc notes, and this outing is in part a massive out of control comment at her blog, Aegis might be shit. Well I beg to differ. So let us go back in time and note that we are in the 1950s just before the German pinch raid tech has been absorbed by the neudeathfabcomplex in USofA corp and the Tavistock muppets have not yet gotten the green light to cauterise the natural flow of intellectual development and societal health there.

We are in the age of engineering Team Alpha, the dudes and mensch that bolted together the satellite phasephukkery. (We will hopefully get back to that interesting and deepest of secret lifted tech. here very soon.)

If one remembers back to the first shuttle disaster the commentators then pointed out that Team Alpha had long departed NASA and that we had a systemic Team Beta-Omega spectrum working in the shuttle program, Team Beta were in the engineering and software depts.. being screwed over by the Team Omega political administrators.

In the 1950s programme offices of the USN, still trying to grapple with the scare the shit out of the Fleet moments off Okinawa and Saipan a decade or more before, home grown US Team Alphas were absorbing the Team Alpha/Beta+ Germans and their tech. to produce fleet defence against a very real threat from Soviet tactical nukes.

By the time Aegis was engineered for production the USN Team Alphas were getting ready to retire. So the Aegis shield is not crap in concept or engineering.

Commissioning the system was now in the hands of Team Delta, that is what happens when you are raised in a society Monsanto’d by the musical roundup culture. And things happen like 655. How the phukk do you get away with that? It is like the USS Maine shelling Brighton & Hove with its main armament in 1900. Only a Frank Zappa flag officer core could do that! But the weapon worked alrighty. Shootdown. No questions asked. Just ask the grieving families. Oh you can’t because they are embargoed.

That brings us up to date and the shoot downs and disappearances mentioned in the gc blog. By now we’ve got Team Omega managing the system life cycle. USN is infiltrated thoroughly and the whole command and control, naval intelligence, officer corps, political culture and society is riddled with those who would open the gates at midnight to the invader. The news is now an undistinguishable form of fairy tales. Can a holohaux audience care if there are no real shootdowns or real aircraft to shoot down or disappear. Was the disappearance a real non event?

In 2016 we must view Aegis as nothing but one of spectrum of SPECTRE controlled psychological terror weapons. Since there is no way it is going to stop anything from a peer enemy hitting the fleet it is a belief system. Team Omega does not do 20mm flak galleries, it does not do staying at your post as a Judy is about to hit, it does not do anything but iYELLOW and kill the defenceless as its music drones on and on.

Once we get over the Aegis is shit idea we can get a grip on the, as yet unreleased into the HAS, meme of Aegis as rogue. The ground is being prepared for when that concept is needed. Then we can get our heads round the Skorzeny 1943 concept of a politicalpsychologicalwunderwaffe and we get Aegis in 2016. We also understand Putin.

I will repeat here that the ABM shield is an cryptoSSM outwith our control. The system is thoroughly perpefied all the way to POTUS. It is a Trojan horse and will go conveniently rogue on a false launch signal out of Iran. A signal generated by the Roth weapons camp and pirate base in Tel Aviv.

Can you imagine one of these things coming in 5 seconds after launch at Mach 5 and taking out a nuke plant somewhere in Eastern Europe? An ICBM launch will burn its way through the hull of an SSBN if not released. The unspent fuel in an ABM will China Syndrome the ground.

Oh yes that scares you because deep in the Team Omega Beyonce riddled software engineering teams there will be Perp Team Alphas who listen to beautiful things and never ever attend anything in the Herd Attention Space.

So what has that got to do with Brazilian tactical transports?

Well with the Antonov, Airbus, Being and Lockheed plants either smoking, abandoned or too expensive to buy from, where else can you get a ready supply of cheap, expendable C-47 equivalents for use in the low intensity pirate wars that John Company are looking forward to starting. It will be business as usual after a hiatus of over a century.