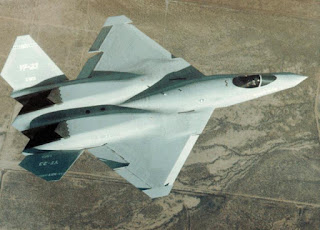 Another windy day in the sheltering city and the sliding of hard bitten icicleylined arse cheeks brings home the eternal consumption of pop pap as we gaze over the domes of our Ur. One does wonder where a discrete Tesla mass phase inverter would be parked in here. Or is it overhead.

As the fighter mafia knew 50+ years ago, just as the reigns were being pulled to stop USofA corp., there was no point in going semi-energy, half arsed in the bleeding at high alpha. It was all or nothing. Like Dreadnought to a pre=Dreadnought. Like stealth to a brickshithouse, no half way house. No right or wronged angles, no specular or scintillator, no harsh language and above all no one knows you are there.

So just as we can argue with some justification that the truest and highest form of battleship died before the last battleships were laid down, I think a good case should be made that the F23 was removed from the time lines because the real 2020 shooting match will be even more desolate than Oswald ever thought as he, inverted and alone, prayed the interrupter gear would not fail again. Isolated in vacuo, individual and collective, more than it was going to be after the M3s were killed. Imaging the task for those upon the Milky Way was going to be even more fragile and lonesome than a Swordfish taking on the Bismarck. Hence the complete waste of time and money spent on F22 and F35. What is the point of not going full retard?

Kind of like the useless reintroduction of holohoax as crypticholodomor meme. You what? You don’t go full monte on the retards unless you have a real need, something of value to hide. So the crypticholohoax is the one that no single retardoricardo or mentalmickeymalthusian of the truth is going near. Ergo we have self budding publishers of a tissue of lies assessed as truth and we are once again in an onanistic reform/counter oration in print.

Another day of watching the tom tom club, who drive their newly taxpayer gifted taxis because they don’t pay taxes, violate all the norms of the Highway code here in the feral refugee refuse pile and refused refuge for the peaceful aboriginals. Pacific in its dullardy and dumbstruck in retarded witness to death being dealt in their name. UK you never had it so good and never had.

If we are property as a Fortean might agree, then someone has the station locker access for our repossession and revelation to the cosmic day again and they are keeping it close to their escrow’s chests. So to even wonder what the metalevelled intention of money publishing is all about is to waste your time in idol speculation about Roth being Nimrod’s self fertilising seed. A thinly veiled self budding load issue.