I grabbed this Corsini article in its entirety, printed off just in case there is an EMPlibrary moment, to savour. Do you really think that this is the only or oldest such archive? Here I have to speculate just a little, not a lot, just a smidgen. Since the recording of “history” using marks on a surface was regarded as a backward step by the ancients, in the aggregate, love that word, then what did the elite do? What was the private technology rather than the public one to guarantee unbroken continuity?

Here is one of the markers of the foundation run “breakaway civilisation” baloney that is so current.

There is no break away, just an unbroken chain of private history which now and again gets intersected by the “public” rebuilding of some sort of coherence. In other words now and again the unwashed bump into and notice the great mission. All covertly however, the mission has to select from the public and recover, the mission is also recon.

Or has been, since if the last tribes are indeed catalogued then that part of the mission is over. All scattered seed has been recataloged and part of the Kalergian oopfart is answered for white genocidalists.

Anyway it is only 400 years, or a little less, since the last Gaelic bard was killed by an English Venetian bitchboy in a Sligo boozer. All continuous unbroken Irish oral tradition was lost at that point. Forgive the inaccuracies there, this bard is no bard, but you get the gist. So how long do you reckon the favoured and protected Apiru “books” can remember back?

How far back do the Apiru records go? If and it is a big if, one knows the tricks on creating a memory palace then imagine the edifice that Lamarckian selection could construct in one human mind. Modern non functional savants are a mere shadow I would suggest for the prodigious feats protected out of sight, if all you ever do is publish money and create cities to hide in, remembering your lineage's matings and activities all the way back to your first commission just outside the door of the temple bowels all those thousands of years ago in land between the rivers.

So have a read at this.

A Look Inside Florence's Strangest Archive

For six centuries, the Corsini Family has recorded everything that's ever happened to them.

One of six archival rooms on the first floor of Tuscany's Villa le Corti. They hold the Corsini family’s archived history, from the 1360s through the 1960s. (Photo Courtesy New York Times Style Magazine) 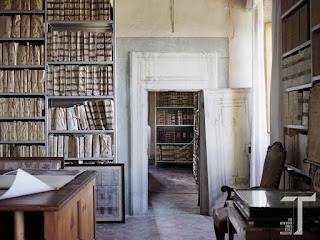 For most of us, understanding our pasts requires a bit of detective work—piecing together family stories, yellowing scrapbooks, and saved letters to form an idea of what life was like for those who came before.

But what if you had more than just scraps and pieces? What if every relative you ever had kept a diary, and they were all in one place?

One Florentine family has managed just that. In a recent feature in T Magazine, reporter Tim Parks visits the Villa le Corti in Tuscany, which houses the Corsini family archives—4,000 feet of volumes spanning 600 years of history, painstakingly recorded in day-to-day detail.

The tradition was started in 1362 by Matteo di Nicholò Corsini, a cloth trader who, like other Florentine merchants of the time, thought it best to keep a record of his every transaction. "I... Matteo, will write down every thing of mine and other facts about me and my land and houses and other goods of mine," he wrote.
Unlike his peers, though, Matteo managed to pass this proclivity down through dozens of generations. "For 600 years his descendants followed his example, writing down everything about themselves and preserving everything they wrote," Parks writes. 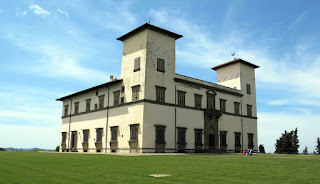 Flipping through the thousands of volumes yields a pizzeria's worth of slices of life—the last will of a 14th century cardinal, the health concerns of 16th century merchants, the private notebooks of 18th century women. The medium lends the sense of history and connection a material component. "Wherever you come to in the archive you are immediately overwhelmed by an intense awareness of paper," writes Parks:
"There is the thick sepia-toned, slightly porous paper of the 1400s and the ultrathin glossy correspondence paper of the 19th century. There are papers with elaborate watermarks, and with tiny cuts made in the 16th century to show that the surface had been disinfected against the plague. Some papers have been eaten away by silverfish; others have gotten wet and smudged."

In the 1960s, the family stopped recording their every move, instead dedicating their archival energies to preserving what they already have. Parts of their villa are now open to visitors and scholars, and others who want to dive into a very specific library—one that houses a thin, deep core of the past.
http://www.atlasobscura.com/articles/a-look-inside-florences-strangest-archive

OK? If the Apiru are servants who is the Great House’s Keeper? Now for the serious speculation.

We know that somewhere back in time a massive event occurred that just about wiped us all out. It seems to be around the time of the Indonesian event circa 64,000 years ago. Assuming that the Earth’s population was large and structured. Assuming it was unified. Assuming no greater level of technology than Chinese circa 1000AD. Now who gets to go voyage on the arcs then if you know it is coming? Which are the precious cargoes within the arks, breeding two by two?

Now imagine if the geezers who ran that civilisation over 64,000 years ago were, how one can put it, genetically disposed to being mass murdering psychopaths and they saved their best.

Underwear soiling time if they are still running the show and it makes so much of recent history, since Babylon at least, much clearer. Things that seem ever so head scratching for academics, like the lack of defensive walls around really ancient cities, are quite understandable if one sees the walls as being signifiers of settled breeding pens for Lamarckian book lines. Follow the city walls and follow the great mission working itself across the globe.