No venom yet just the muse. 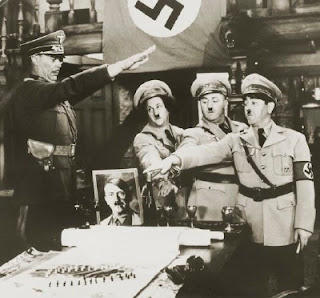 As those who’ve read here since the early days will know during the summer I ritually slaughtered a cow and burned it’s entrails to discern the future.

I got my toga all scorched and only later realised that I’d missed an “r” in the ceremonial details.

So having learned my lesson today I’ve burned the entrails of a virtual crow and this is what I see.

No matter what happens in the next general election, unless everyone who is eligible to vote actually votes, and even then it will be dicey for decades to come, we can kiss good by to freedom, representative democracy, the nation state and welcome in rabid belief systems designed to kill.

Let’s start with the 646. Most have been caught, as planned stealing, the cull will allow the next generation of plants to be placed in power. These trouble makers will continue the destruction of our representative democracy by causing chaos. The 2(3) party system will break down in to a melange of grouping constantly shifting and stabbing each other in the back. Quietly rabid minority parties will get rabid policies through in coalition. Think Knesset rather than the Mother of Parliaments.

The current leaders of the main parties are total wastes of specie.

Our unelected, CIA programmed PM is a total and utter nutter. Everything he has done has been spineless deception in the play of a foreign power. Look at the country? UK plc cannot keep the lights on and the commercial intercourse of its people moving. Soon we won’t be able to feed ourselves. What may I ask shall we trade for turnips on the international markets? We cannot offer anyone anything for the first time since the 5th Century AD.

Her majesty’s loyal opposition is fronted by a guy who is more at home on the polo fields than the fields of politics. He is a stooge, he cannot say anything that will change the dynamic in UK plc politics because he cannot get it, UK plc has been invaded and is to be absorbed and its independent traditions removed. If he was oppositional, if he was loyal he’d have called the NaZoviets out long ago. No, he’s wrapped in Greenery like a great big Faerey Greene King going along with the Grimm’s tale of manmade destruction of the planet.

Why do we find ourselves in this situation?

We are spellbound. Enchanted. Hypnotised. We do not see reality.

The reality is that freedom hating cabalists have decided that we’ve served our usefulness to them. We’ve gone and discovered too much that will threaten their parasitic epicurist lives and we are to be removed.

No more free jurisprudence, no more habeas corpus, no more trial by jury. Just secret diktat and the Star Chamber.

If you want to see what’s in store look to the past since the same families are working at a Restoration.

“Most typical of the Venetian system is the Council of Ten, established in 1310 as the coordinating body for foreign and domestic political intelligence operations. Meeting in secret session together with the doge and his six advisors, the Ten had the power to issue a bill of capital attainder against any person inside Venetian jurisdiction, or abroad. If in , that person was generally strangled the same night and the body thrown into the Canale degli Orfani.

The Ten had at their disposal a very extensive foreign intelligence network, but it was inside Venetian territory that their surveillance powers became pervasive: the contents of any discussion among oligarchs or citizens was routinely known to the Ten within twenty- four hours or less, thanks to the ubiquity of its informers and spies. Visitors to the Doge's Palace today can see mail slots around the outside of the building in the shape of lion's mouths marked Per Denontie Segrete ("For Secret Denunciations") for those who wished to call to the attention of the Ten and their monstrous bureaucracy individuals stealing from the state or otherwise violating the law. Death sentences from the Ten were without appeal, and their proceedings were never made public. Offenders simply disappeared from view.”

The really frightening thing that I see in the burning entrails is that the majority of the population of UK plc do not care for freedom; they did not tend to its delicate shoots nor attend to feeding its young. Instead it was ignored and now will be taken away.

Decades of giving rights, benefits and entitlements have dulled the not too sharp senses of the recipients. These things were doled out by the State and the State will take them away instantly.

Freedom does not come from anything constructed by mankind and cannot be taken away, that’s why the dole house kills.

What do we do?

Recapture ourselves, ignore ANYTHING reported or dished by MSM , and believe only your experience. If you feel like you live in a prison then that’s true no matter how much marketing spend you are targeted by. If you cannot speak, say, write, travel, associate and mate without some Dodgey Venetian Stasi NaZoviet CHEKA fruitcake sticking their great big nosey fascist beaks into your private business then you are indeed a prisoner.

If your pocket is picked by agencies enforcing statute then you are a victim of larceny. If the law of the land is not being upheld then you are subject to rule by fiat and whim. The Queen of Hearts will seem rational by comparison.

Finally if there is no work to be had other than being part of the schemes and scams designed to kill freedom and part people from their little money you now know how all those little cogs in the huge dictatorships felt as they waited to be taken away in the middle of the night by the Lead Pill Pharmacy.

Not everyone is going to make it through. We have to realise that there is no where left to run. In the 16th century you could get on a boat and flee. In the 19th century many more did so. In that flood, the agents of the oligarchy were obviously present. They are easy to spot. They never lack for good food and wine, are bankrolled, never have calloused hands and they talk utter nonsense dressed up in the latest sophy. Recognise ?

It is a time for individual sovereignty, defence of your own thoughts and the care of a new belief system diametrically opposed to Oligarchy and its moral squalor.

The first day after the General Election is when it kicks off. It will be attritional, hugely so, however that didn’t stop our ancestors and just like then we know who the Doge is.