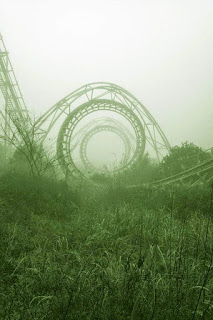 whenever we deal with any of the tales emanating from 1930-1955. If one is reading a rip roaring tale of gold hunting in Batavia, Golden Lilly, then always look for the uranium connections. If one is reading about OSS covert ops into Czech territory looking for Kammlerstab IP, Paperclip, then make sure to look for, non obvious, gold related threads to the story. Swilling in the background, all unnoticed like, will be Mercury.

Other things to look for are a swift death at the hands of the Allies in swing courts of inconvenient truthers. Mysterious multiple deaths of doubles and triples in the final months of smart lads. Weird connections to Holocaust propaganda. Weapons of mass destruction and human experimentation. Royalty.

This concoction of narratives is designed to keep one from looking too closely at what was really going on at the Meta historical level. In fractal history everything is camo. However no matter how hard the geezers in the BIG room try they cannot stop their own rivalries seeping through into our everyday banality.

*Tomoyuki Yamashita (山下 奉文 Yamashita Tomoyuki?, November 8, 1885 – February 23, 1946) was an Imperial Japanese Army general during World War II. He was most famous for conquering the British possessions of Malaya and Singapore.

*The 5th SS Panzer Division Wiking was one of the elite Panzer divisions of the thirty eight Waffen SS divisions. It was recruited from foreign volunteers in Denmark, Norway, Sweden, Finland, Estonia, the Netherlands and Belgium under the command of German officers. During the course of World War II, the division progressed from a motorised infantry formation to a Panzer division and served on the Eastern Front during World War II. It surrendered in May 1945 to the advancing American forces in Austria.

Both of these wiki refs then go on to give a brief description of their life spans until the end.

So let us apply the concoctions of history to their lives in the great genocidal operation after a cursory summary.

Yamashita.
1 Operating in Kwantung.
2 Then the good general suddenly achieved a great victory over a UKplc force that was at the highest level to be sacrificed in the Brisbane line strategy to exhaust USofA corp. over two decades. The thing about western children is that they do not understand that real wars last centuries nothing is ever “home for Christmas” in the real world.
3 He then gets banished to Manchukuo.
4 Then back to Philippines.
5 Then dead.

SS 5, which is Dutch, gets formed after the SS conzentrationslager taint of other SS units can stick to it. In four years it travels farther and fights longer and harder than any other unit, Heer included.
1 Briefly it is 1941-Rostov.
2 1942-Caucasus.
3 1943-Ukraine. Then destruction in KP Kassel 1944.
4 Rebuilt and operates with SS 3 delaying/blocking Soviet advance into Poland east of Warsaw 1944.
5 Spends 1945 operating again mainly with SS 3 on the approaches to the Reichsprotektorate (Redoubt?).

Looking at this in the millennial war planner’s kaleidoscope Ukraine/Philippines and Manchukuo should be viewed as Hannibal/Hasdrubal viewed the Iberian Peninsula. A kind of extra jurisdictional fire base.

And retranslate into what we can now make sense of.

Oooh look what falls out of all that bollox.

Just in case you didn’t get that let me do an Alex Jones on you. The biggest load of false dining napkins on the planet, Bilderberg, actually was a serious organisation when it began, 60 years ago now. Royal Dutch SS Prince Bernard kicked it of to coordinate recycling the strategically evacuated loot of Europe.

I chose SS 5 because it is the first of the SS units to display the private use not national use of Waffen SS forces. As a good business student will realise the national and Waffen SS strategy was aligned in 1942. As the war progressed it became less so and blatently disengaged by 1944/45. Indeed I have highlighted “Papa’s” little faux pas at Kharkov with SS 1 Corps as an indication that we have a deep schism hidden already. By the time SS 1 gets taken to Italy during Zitadel we have a new business model arising and at that point the allies business plan is in deep shit.

So more relationships can be added to our little list.