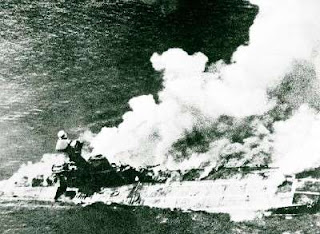 As I remarked 6 years ago

“I’ve read a lot of stuff over the years about Hakata Bay 1274. The story I like most is that the local Samurai met the douche bags on the beach and although they were all wiped out they put up such a stunning defence on the day that the Mongols went back to their boats instead of establishing the bridgehead that day. The kamikaze turned up and bye-bye simple minded psychopaths. Sweet.” http://specificgravy.blogspot.co.uk/2009/10/golden-south-america.html

The mongheathen representative on earth got a good Jungkicking Wreck from Kublai Khan’s lost fleet found off Japan and the Kamikaze awaited the next arrival of Yahweh’s terroristas. (The Icelanders need to take note here. The mongheathen never forget. Expect Reykjavik wrecked unexpectedly.) So 600 years later the Môn heathen started the process again from the other direction. Once again the Kamikaze sought to blow them away.

Right now everyone is shitting themselves that the ChiComms may be ready to wander onto the world stage http://specificgravy.blogspot.co.uk/2009/12/where-is-guam.html however it is not the ChiComms but a SinoYahwehist distillation of what was the Chinese people. One does not spent 800-900 years destroying and murdering its inhabitiants, a civilisation, to have it reappear. No this is not anything Confucian turning up it is another Yahweh Murder Army.

Anyway back to the IR fuses, proximity fuses, rockets and payloads.

One of the things that always made my cockles warm was reading about the later Pacific campaigns of the UK Far East Fleet after the Tirpitz went belly up. I loved to hear about British armoured carriers having Kamikazes bounce off the deck and operations continuing whilst USofA carriers immediately were taken off ops as soon as their wooden decks got scratched. I exaggerate massively of course but you get the gist. In those days as I read and re-read the exploits of HMSs Victorious, Formidable, Illustrious and my favourite in the Med., I was blissfully ignorant of the real problem that no amount of armour could deal with. A fact which brings the weapon system payload involved and type into view again.

As this mind seep has mentioned before on many occasions the mass of circa 10,000lbs keeps turning up in allied, read UK, special ops in the period 1942-1945. That is the ball park mass for a big one and as we know in the pre 1939 period delivery of such a special package needed sea borne, most likely fast war ship, arrival on a one way trip. Think HMS Manxman here.

Now I know that we will have to put aside the problems presented by Tinian/Peleliu, Port Chicago, IJN submarine warfare failure, fake hospital ships and USS Indianapolis in the following manifest mind burp but stay with me on this.

On the other side of the coin the bad guys are getting all busy to drop circa 1000kg on the good guys using proximity fuses, rockets and gun triggers.

Note that 5 to 1 discrepancy in local mass.

So WTF is going on here? Did the bad guys simply intend to deliver 1 tonne of organophosphates? Well it really depends on the target and despite never having seen it described anywhere I suspect that in areas that were to be occupied one would have used an organophosphate/neutron one/two to aid sterilisation and rapid recovery. Cities/Ports.

We also need to look at Bikini in its original bare form. A test of what would have happened to the fleet off shore/landing ships inshore at Olympic. Is it not interesting that KMS Prinz Eugen went out in a nuke blast just as UK feared might be the case after the channel dash was pulled off. Note that 3 years after total war economy, total R&D and complete direction of all UK society’s activities, jailing witches etc., a nation which was not on a war footing managed to pull off the equivalent of taking a naked dump on the front lawn of the White House on 4th July!! These little indicators reveal more than the history fabricators would like.

As my readings matured I spent a lot of time reading and re-reading Friedman et al at the Naval Institute Press and being a turney burney kind of guy the fleet defence problems associated with Kamikaze attack took a great deal of my research time. I still though, despite understanding solutions, remained at a deep level, puzzled.

As usual with these givens the assumptions bounding the problem are the main obstacles to truly understanding what was going on unsaid. If one accepted the Marianas Turkey Shoot how could one reconcile an off the home islands US Fleet bloodbath no matter whether armoured deck or deck chair? If one could accept that the cream of IJ aircrew had long gone and only young, 30 minuters, lads crying into their pillows stood between Down Town Tokyo getting turned into a McPukemall and continuing geisha supremacy then what was the problem? Indeed just read through the recollections of Bodenplatte survivors to understand just how one way nominally non suicidal missions were for barely trained pilots.

And then one remembers that old pre WW2 RAF saying. “The bomber will always get through”. Note singular with an unsaid singular weapon.

So immediately after Philippines and Okinawa the USN decides to put a fleet defence umbrella to keep that last bomber far, far away because the unsaid, unwritten requirement is to keep a moot incoming IJN nuke away from the fleet. Immediate response involves a new interceptor.

The Grumman Bearcat starts a trend of sprint start off the deck to target that will consume Paperclip draftees through the great engineering indigestion of 1945-1960 whilst assimilating/hiding technology that no one in the “free” west understood fully. Look at the USS Enterprise/USS Long Beach paring in 1960 just before the missileer concept is realised. Terrier/Talos/Polaris/nuclear propulsion. Paperclip all.
Now I know you are going to go all skrypto on me here and point out that the bad guys couldn’t have delivered a nukeythingy because they had no delivery systems like the Mighty 8th , B29s or RAF Bomber Command so yaboo sucks to you. The A9/10 was still unable to deliver so swivel on it! An Ohka couldn’t even deliver the V2’s circa 1000kg warhead, only just over half. So who is going to drop 5000kg of tube alloy derived nukestoff on the west’s forces.

Well looking at the defence and their proximity fuses which proved successful against V1s they proved to be useless against a vertical fast mover like a V2. Wood, ohka, might make the fuses ineffective. Who says you need to fly them in anyway? I suspect there is a great deal more about the RAF pathfinder Mosquitoes dropping 4000pounders into railway tunnel mouths in early 1945 than to give the Fat Controller a scheduling headache.

However if we ignore the organophosphates and someone needs to explain how the most evil regime of all time never used its ten of thousands of tonnes of that muck, I know Stalin would have, a technology that the west could never have developed because it was too backward in science. Then we end up in Ohrdruf, we end up wondering just how much two way submarine traffic got through to Penang, Singapore, Yogyakarta and points east and we end up going back to those clever German radio chemists, not the Hollyweird physicists, who may have concocted ballotechnics.

Somewhere at the top levels of the USN in 1944/5 those questions were asked and certain assumptions made on the evidence we do not get to see even today.