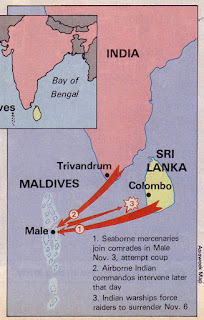 So much worthy of careful study here from every possible angle.

The View from Taiwan: Tsai makes TIME: Got good news and bad news for you'ns. The good news is that DPP Presidential candidate Tsai Ing-wen made the cover of TIME with an ...

but when the high velocity pharmaceuticals start getting delivered it should be obvious what bankers commission armed forces for.

The lesson from warfare is never, never invade wilderness, that is what migration as trade is for. You use armed forces as market clearing mechanisms and for theft of lives. Normalisation of populations through death and destruction, genocide, for banker compliance is the sacred mission. Always has been always will be.

The real big one is still coming and it is coming to SE Asia/S Asia/N Australasia. The crescent of conflict will run Pyongyang/Guam/Yoghakarta/Maldives.

USofA corp will be absorbed in a Nth/Sth localised version of hyperlittoral warfare as it is kept marginalised and the concepts of freedom in that hemisphere are extinguished.

Now I know you are thinking that seems a bit mizz, however the new corporate supremacist Pilgrims will be setting out for a better life in the afar.

Go one then why would the ChiComms be thinking of going NewChristian state religionstylee and the two corporate Startrooper religions be set up in USofA corp territory currently?
Posted by INCOMING!!!!!!! at 22:47