If there is one thing that can be guaranteed righthererightnow it is that there was a massive cocktail party 70 years ago to celebrate further murder paid for by NYLON, in NYLON, the artificial money laboratory.

Just like the deportations from UK/US/FR controlled Europe in 1945 that resulted in the deliberate murder of millions of persons in Stalin’s, the NYLON bitchboy, Potsdamplaypen, must have had a serious shagfest going down behind the closed doors of grand buildings so that the rationed, barred from entry, Eurabos couldn’t tell that they’d had the piss taken out of them again..

If you think otherwise then you can GGTF!!

Just like if you think there is anything other than completion of European eradication these days by the EU/NATO bitchboys and boybitches of the COMINTERN.

If you don’t think that murdering Mancuntian candidates exist just watch anything involving the EU/NATO perpreps wandering on their cuntferencestages and ameobicbloodred carpets.

Can you count the murdered?

“Three Baltic States Commemorate Post-War Deportations
People in the three Baltic states of Latvia, Estonia and Lithuania will recall one of the region's darkest hours, the Soviet deportation of thousands of ordinary families four years after the end of World War II. 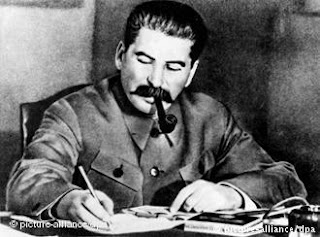 Stalin signed off on the deportations of thousands of Estonians, Latvians and Lithuanians

The March, 25, 1949 deportations saw people seized from their homes without warning and transported, literally like cattle, to the frozen ends of the earth, marking one of the lowest points even by the standards of the Soviet Union's oppressive history.
In a short period of time, around 100,000 Estonians, Latvians, Lithuanians were sent to Siberia in cattle trucks to scratch a living from the permafrost in labor camps. Some died on the way, some died as the years passed - and a few made it home.
Among those was Juozas, an elderly Lithuanian in Riga who was urging passers-by to visit a new photography exhibition at the Latvian Photography Museum titled "Siberia 1949-1989" which traces the lives and deaths of deported…….”
https://www.dw.com/en/three-baltic-states-commemorate-post-war-deportations/a-4124345