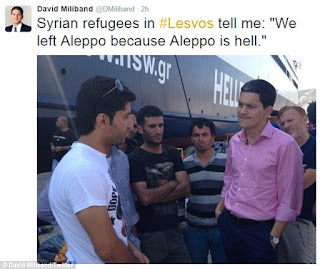 Spotted on the child shagging channel this morning we have one of the Moribund work shy phukkwitz brothers Carrymob spouting bitchboy scripted bad crisis actor shyte.

"Speaking after meeting refugees in Lesbos, Mr Miliband said: 'Tomorrow the EU has an opportunity to move beyond its fragmented and lacklustre response to date and finally acknowledge the severity of this humanitarian crisis.


'Europe is facing its largest refugee crisis since the end of World War II.

'Each country needs to shoulder the burden and agree to both relocate refugees who have reached the continent and resettle the most vulnerable from the Middle East.

'The UK's decision to annually resettle 4,000 Syria refugees over the next five years is the equivalent of accepting the number arriving on a single day on the beaches of the Greek island of Lesbos, where the IRC is providing humanitarian assistance.

'The total offer of 20,000 is the same as the number of refugees who arrived in Munich last weekend.' http://www.dailymail.co.uk/news/article-3232798/David-Miliband-criticises-UK-offer-Syrian-refugees.html

And with that he fukked off to swill some more UN champagne and touch base with his Alinskyist handler and all round Trotskyist/Maoist belle end Nanny McClinton the child killer.

What a collection of scum and You clowns who are being removed from history allow them to breath!!! Nay. You encourage them.