A hiatus at the Hallucinohoax

Like Castle Wolfenstein we have gamemasters at work in the reality sphere.

Here are a couple of recent posts from Winstonsmith and Scrapbookpages over on the blogger bar. Consider, then add together, then subtract ALL we have been fed by Soviet, British, Yank AND SS propagandists since 1945.

Don't even bother with “valuable things the Jews left” . 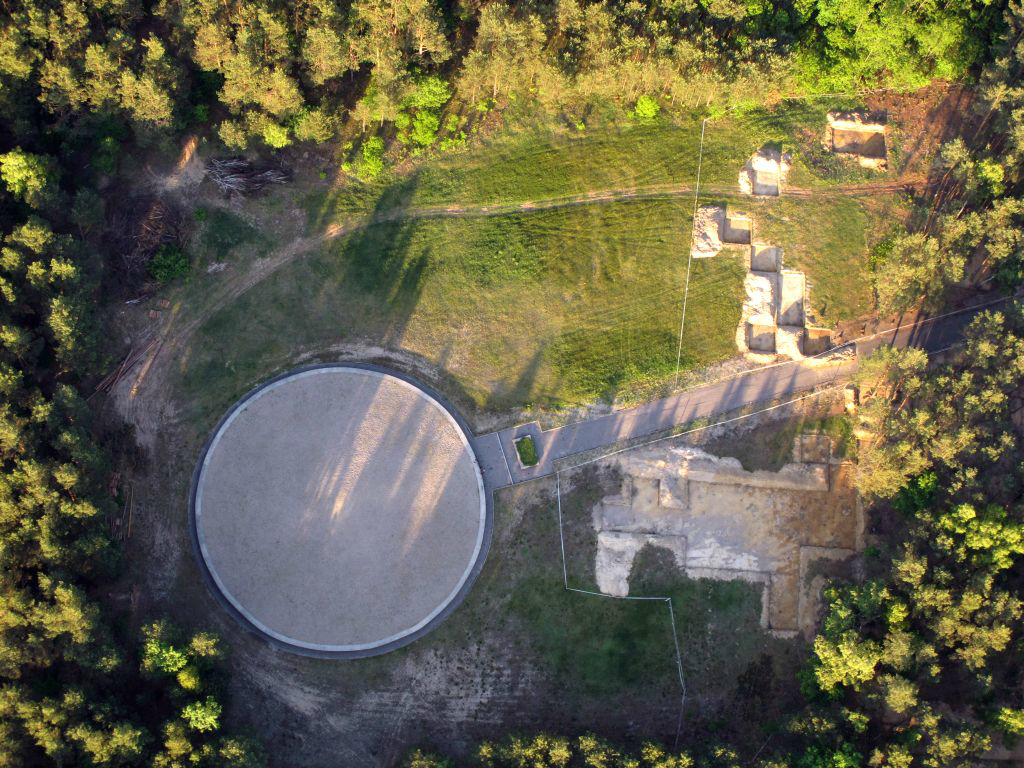 The following quotation is taken from the English translation of a short book written by Marek Bem, the director of the Sobibor memorial museum, and Polish archaeologist Wojciech Mazurek:

In July 1944, the area, which had former been the extermination centre, was taken control over by the Red Army and the Polish People’s Army units. As of 1945, the new Polish authorities used the barracks left by the Germans, as well as the railway platform, as a railway station in order to gather in one place the Ukrainians meant for relocation. In 1945-1947, the Ukrainians from the eastern part of the Lublin District were relocated to Ukraine or to the western parts of Poland. The Ukrainians, who were waiting for their trains (sometimes even for more than a week) needed wood to light fires. Thus, they dismantled the remaining camp barracks, contributing in this way to the task of obliterating the last traces of the German extermination centre in Sobibór. Most probably, local residents finally completed the task of destroying all that remained of the camp, including the digging up of the ground to find the expected “valuable things the Jews left”.

Filed under: Germany, Holocaust — Tags: Aktion Reinard, carbon monoxide, Sobibor — furtherglory @ 10:10 am
Sobibór was one of the three Aktion Reinhard [Reinhardt] camps, which were set up after the end of the Wannsee Conference, which was held, starting on January 20, 1942, to plan “The Final Solution to the Jewish Question in Europe.”

Sobibor train station in Poland
One of the followers of my blog visited the site of the Sobibór camp 10 days ago. He made a comment on my blog which included a link to this news story.  The headline of the story is

This quote is from the news story:

Another archeologist involved in unearthing the gas chambers, identified as Wojciech Mazurek, offered a bone-chilling description of the concentration camp.
“The extermination of people took place there; murder by smoke from an engine that killed everyone within 15 minutes in these gas chambers, in torment, shouting,” he told Reuters Television. “It is said that … the Nazis even bred geese in order to drown out these shouts so that prisoners could not have heard these shouts, these torments.”
[...]
In the wake of the camp uprising that occurred on 14 October 1943, the Germans decided to dismantle the camp. Apart from certain structures that have been dismantled since the war and the few buildings in connection to the camp that are still standing, the site has remained bare lacking any real trace of the former extermination camp.

Sobibór is way out in the boondocks.  Why did the Nazis go to such trouble and expense to take the Jews to this God-forsaken place, when they could have just set up gas chambers in some more convenient place?

The site of the tiny village of Sobibor in Poland  Click on the photo for a much larger size
I have written about Sobibór on my blog in the past, but it bears repeating.
The Sobibór “extermination” camp was on the eastern edge of German-occupied Poland, five kilometers west of the Bug river. The Bug river was as far as trains from western Europe could go without changing the wheels to fit the train tracks in the Soviet Union, which were a different gauge.
On the other side of the Bug river from Sobibór was Ukraine, which had belonged to the Soviet Union until it was taken by the Germans shortly after their invasion of the Soviet Union on June 22, 1941.
The unsuspecting Jews, who arrived at Sobibór, were told that they would be sent to work camps in Ukraine after they had taken a shower, but instead, the Jews were immediately killed in gas chambers that used the “lethal smoke” known as carbon monoxide.
The Jews were not registered upon arrival at the Aktion Reinhard camps and no death records were kept by the Nazis.
The Nazis claimed that the Aktion Reinhard camps were transit camps for the “evacuation of the Jews to the East,” a euphemism for the genocide of the Jews. Unlike the death camps at Auschwitz and Majdanek, the three Aktion Reinhard camps did not have ovens to cremate the bodies.  The German people are noted for being efficient, so this oversight is inconceivable.
Whatever happened to all those bodies? Were they buried, or burned on outdoor pyres?  According to the survivors, the bodies were first buried and then dug up and burned on pyres.
The head of Aktion Reinhard (Operation Reinhard) was SS-Brigadeführer Odilio Globocnik, who had previously been the Gauleiter of Vienna, Austria. Unfortunately, Globocnik and Reichsführer-SS Heinrich Himmler both committed suicide after being captured by the British, so we will never know their version of what happened.  Thanks to the British, the    Holohoax story is safe.
At the Nuremberg International Military Tribunal in 1946, documents were introduced which showed an exchange of letters in 1943 between Reichsführer-SS Heinrich Himmler, the head of all the concentration camps, and Richard Glücks, the Inspector of the Concentration Camps, in which Glücks suggested that Sobibór be converted into a concentration camp. In a letter dated 5 July 1943, Himmler rejected this idea. This indicates that Sobibór was not a concentration camp, but rather a camp that was not part of the Nazi concentration camp system.
The three Aktion Reinhard camps were all in remote locations, but “each site was on a railroad line linking it with hundreds of towns and villages whose Jewish communities were now trapped and starving” in the spring of 1942, according to Martin Gilbert’s book entitled The Holocaust. Sobibór was linked by rail with many large Jewish communities, including Lublin, Wlodawa and Chelm.
Jews were also brought from the Theresienstadt ghetto, located in what is now the Czech Republic, although Theresienstadt allegedly had a gas chamber.  Jews were also brought from the Netherlands, to be gassed at Sobibór.
The Jews from the Netherlands were brought to Sobibór on passenger trains.  This begs the question:  Why didn’t the Nazis save money by gassing these Jews in the Netherlands? Why didn’t they use these valuable trains for transporting German troops?
Deportations to Sobibór began in mid April 1942 with transports from the town of Zamosc in Poland, according to Holocaust historian Martin Gilbert.
The Jews from the Lublin ghetto were also sent to Sobibór to be gassed, although there were three or four gas chambers at Majdanek just outside the city of Lublin. Now this doesn’t make any sense at all.  The Jews could have walked to the Majdanek gas chambers, but instead they were transported on trains to Sobibór.
During the first phase of the extermination of the Jews at Sobibór, which lasted until July 1942, an estimated 100,000 Jews were gassed to death. Their bodies were buried in mass graves, then dug up later and burned on pyres.
During the next phase, the bodies were burned immediately, according to Toivi Blatt, one of the few survivors of Sobibór. At the age of 15, Blatt had been selected to work in sorting the clothing in the camp. Philip Bialowitz was also selected to work in sorting the possessions of the Jews who arrived at the camp; he also survived.
During World War II, and for years afterward, the Sobibór camp was virtually unknown. William Shirer did not even mention it in his monumental 1147-page book entitled The Rise and Fall of the Third Reich.
It was not until the release of a 1987 TV movie, Escape from Sobibor, based on a book with the same name, that the public knew of this remote spot where 250,000 Jews lost their lives. The movie tells the story of the revolt during which around 300 prisoners escaped; no more than 50 of them survived to the end of the war. Philip Bialowitz and Toivi Blatt were among the prisoners who escaped and survived.
I have never visited the site of the Sobibór camp because there is not much to see there.  The photo below, taken by Allen Collins, shows two monuments in the alleged location of the gas chambers. It has now been confirmed, in this news article that this was the location of 10 gas chambers.

The remains of 8 more gas chamber buildings were found near the monument (click on photo for larger size)
In the photo immediately above, notice that the monument made of red stone has been temporarily removed from the block on which it stood.
Survivors of Sobibór do not agree on the number, nor the size of the gas chambers. The victims were allegedly killed with carbon monoxide from the exhaust of engines taken from captured Soviet tanks, which were stored in Camp IV. There is also disagreement on whether these were diesel engines or gasoline engines.
In the wake of the camp uprising that occurred on 14 October 1943, the Germans decided to dismantle the camp. Apart from certain structures that have been dismantled since the war and the few buildings in connection to the camp that are still standing, the site has remained bare lacking any real trace of the former extermination camp.
According to another news story, which you can read here, the exact location of the gas chambers has now been found.  The photo below shows the exact spot where the gas chamber building was located.

Exact location of Sobibor gas chamber has been found

The unbelievable testimony of the Holocaust survivors: Are the Jews overplaying their hand?In "Holocaust"
Dutch Jew wants Demjanjuk to be sentenced to 15 years in prisonIn "Germany"
Demjanjuk is back in court --- testimony from the dead will be heardIn "Germany"
Comments (20)