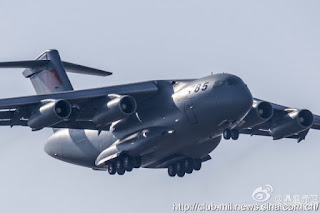 For this return to the question “Why such big phekking lifters in the HW, and now of all times?” we need to set our nonlinears to Sun King mode and stare hard at the fallow fields in the Hyperlittoral.

And with that we move swiftly to this crate
And this one
Then this one.

So with that in mind we ask another question. What do the ChiComms bring to the business strategy that the Sun Kings no longer provide?

At this point I assume three things.
1. US airlift is worn out and unrepeatable.
2. EU airlift is for golden chariot racing.
3. Other producers in the area and out of area(Brazil) are too limited to hall 35-45 tonnes of time servers and phase conjugates out to the islands.

With that in mind we can therefore concentrate on the idea of just what can the ChiComms bring to the party? Well back to those 40 year old birds form USofA. The basic idea was dropping in heavy shit to a hot strip, think Khe Sanh but with a full on Soviet OMG operating in theatre and instead of C130s delivering ammo through Rothfire, think delivery of MBTs into a SAM belt. Lots of bent airframes littering the area.

The end result 10 years later was C-17. C-17 is 30 years ago now. Anyone thinking of doing similar with a European A400 is mental. A400s are royal chariots, for parade and display, awing the abos and *operaciones espeziales.

UK A400s will be going in very quietly to place and extract gold, criminal family networks, drop terrorists, drop anonymous RCE/WMD and generally help in mayhem generation via AirMafia. As cover they will be all over any UN food drops to engineered famines, during script rewrite and preparation time, so the dumb pfukks that watch Xfarter don’t get it.

Now the new ChiComm and, to a lesser degree, IJ lifters look more like 65 year old tech, like a C-141, dragging lots of dense shit around on schedule to quiet strips 3km long. They will load out before they bulk out. So the proposed integration of the civil fleet by the ChiComms is not relevant for this speculation. We are talking hauling "magic", most likely heavy metal encased circulating plasmoids, into shield zones on the 1st island defence chain.
http://rangingshots.blogspot.co.uk/2016/01/hyperlittoral-war-watch-t-4-and-closing.html

Like UPS but with lots and lots of hi-spec kit for elite fire fight forces. It also lets us know that somewhere deep in the IJ planning machine there is a realisation that the clapped out US airlift ain’t going to help. The 5th Aircav is not coming over the hill to save the day.

In fact the Sun Kings will most likely be shagging the horses, debating their human rights and sacrificing children than doing any real fighting.

I mean to get that true degenerate Sun King vibe just look at the recent flyby in Korea kicked off, all surprisingstylee, because the kept trollop spaniel let off a big stick. I did mention last year that the stupid hair wearing Swiss finishing school boybitch
http://specificgravy.blogspot.co.uk/2015/09/unification-or-global-wasteland.html

couldn’t wipe his arse without massive technical assistance from the Goldmansucks MiB, so the big fizzle was fully signed off in Basle and the tech teams dispatched ages ago
http://specificgravy.blogspot.co.uk/2015/12/weapon-storage.html .

All the ChiComms can bring to the party is low overheads. As per UKplc compared to France in 1715. Back in the 18th century UKplc had that strategic alignment with the business plan that the preRoth required. USofA corp. had that same look in the early 20th century that the postRoth Rock required. Now the postRothRock have ChiComms aligned with the business plan. Young ignorant soon to be bodies of men.

It has taken London City since 1688 to trash Europe satisfactorily. What metric does the Roth use to work out whether it has achieved its aims? If a Roth turd lands on your head and you do nothing about it that means you are Roth Herd Attention Space adapted. So the Roth HAS HeadTurd index is our metric. Europe is 100. USofA is 75. So Europe and NAmerica smell like an abandoned latrine in high summer.

Where in the world do the roses smell by any other name?

Well, Roth having failed in the 20th century to turd all over India/Indonesia, we can rate all of SSEAsia is 5-15 on the RHASHT index. The inhabitants of SSEAsia prefer the smell of their own shit. Guess where the London ChiComm munitions will be dropping soon? And guess which families will be lifted out to safety in the west soon?

What does that mean for you and me? The geezers who can see all this coming. If we are lucky we get to set up a fine cuisine like the cooks turfed from the great houses did after the Sun King was long gone.

*Operaciones espeziales estan hidden paramilitary criminal operations, occultos, carried out by fuerzes espaciales on behalf of the ruling criminal networks, at large and infesting the west. Examples would include retrieval of IJ looted gold from the Philippines in the 1970s by ANZAC submarines on behalf of the London gold fix. More recently would include managering the opium crop in Afghanistan for USD support.
Posted by INCOMING!!!!!!! at 11:43